As part of its contribution to managing nuclear risks and their consequences on people and the environment, IRSN provides its support to the public authorities in situations of radiological or nuclear emergency. As part of this mission, it takes part in the monitoring and warning system in the event of an incident or accident involving sources of ionising radiation, activates its technical crisis centre (CTC), centralises the results of measurements made in the environment, and dispatches its mobile resources on site. In parallel, it proposes to the safety authorities measures aimed at ensuring the protection of the population, workers and the environment, and at re-establishing the safety of facilities.

For this, the Institute possesses crisis organisation that can be activated around-the-clock in less than one hour and which is capable of mobilising, in every field concerned by an emergency situation, a coordinated team of 400 experts in the CTC, based on the site at Fontenay-aux-Roses (Hauts-de-Seine) and equipped with a communication cell. The members of the crisis team convene there to analyse in real time the information transmitted by the nuclear facility operators, by Météo France and by the Téléray network (which conducts real-time measurement of the radioactivity in the air), to establish a diagnostic of the situation and a forecast of its development, and to assess the discharges and the consequences for people and the environment. The CTC coordinates a mobile cell which is responsible, on the ground, for taking measurements in the environment and on people, and coordinates the fixed laboratories of the Institute, the remote monitoring network support, and the dispatching of representatives to the Prefect concerned and the interministerial crisis cell (CIC – Cellule Interministérielle de Crise).

IRSN takes part every year in national crisis exercises, to which it contributes the preparation of scenarios, and in international exercises, particularly for the IAEA, as well as in-house exercises on topics such as acts of malice.

In a radiological or nuclear emergency situation, medical and healthcare management relies on the rapid estimation of the individual doses received both in the triage phase on site and in the diagnostic phase in the hospital. Coordinated by IRSN in the framework of the ASTRID 2020 programme, funded by the AID (Agence de l’innovation de défense – Defense Innovation Agency) and operated by the ANR (Agence nationale de la recherche – National research agency), the artificial intelligence project for the detection of chromosomal aberrations in biological dosimetry (INCREASED) aims to adapt the most powerful artificial intelligence algorithms to the automatic detection and classification of chromosomal aberrations revealing the radiological exposure of victims. The time savings and the increased number of analyses envisaged by this new approach are essential to operational management. Scheduled to run for three years, INCREASED presents a wide range of applications both in the context of accident situations, including those resulting from acts of malice, and for the health monitoring of persons exposed in the course of their professional activity.

DETECTION OF RADIOACTIVITY IN THE LME STEELWORKS: IRSN ACTIVATES ITS CRISIS ORGANISATION

From 23 to 26 October 2021, IRSN set up its technical crisis centre (CTC) following an incident leading to detection of radioactivity in the steelworks of the LME company, Trith-Saint-Léger (North department), where metals from different scrap dealers are melted down. In association with the DREAL (Direction Régionale de l’Environnement, de l’Aménagement et du Logement – Regional Department for the Environment, Development and Housing) and the prefecture, the Institute dispatched on site a team of 11 people to confirm the presence of caesium 137 in the installation, to identify the process zones revealing traces of radioactivity with a view to establishing the measurement priorities for the internal exposure of workers, and to characterise the site environment in the search for possible contamination. The inspections carried out over two days on 98 people at the steelworks site and the measurements made on the soil and plants in the steelworks environment revealed no internal contamination of the people or radiological marking of the environment.

CONTRIBUTION OF IRSN TO THE SECNUC GOVERNMENTAL CRISIS EXERCISE

This exercise, which took place on 18 and 19 May 2021 aimed at testing the capacity of the State to handle the post-accident management of a major accident occurring on a nuclear reactor and leading to radioactive discharges into the environment. The Institute set up its technical crisis centre (CTC), comprising 45 people, and took part in the various structures of the Interministerial Crisis Cell (CIC). The first day of the exercise was dedicated to managing the crisis (evacuating the population, prohibiting consumption, food recommendations, etc.), and the second took the form of thematic workshops aimed at anticipating the questions to be dealt with in a post-accident logic (protection of the population, continuity of social and economic life, continuity of power supply, waste management, and communication).

The feedback from the SGDSN was able to confirm, in particular, in light of the exchanges during the exercise, the utility of the direct interactions of the crisis management department with IRSN and the need to guarantee, long-term, in the event of an actual crisis, a high level of representation in the operational centres. 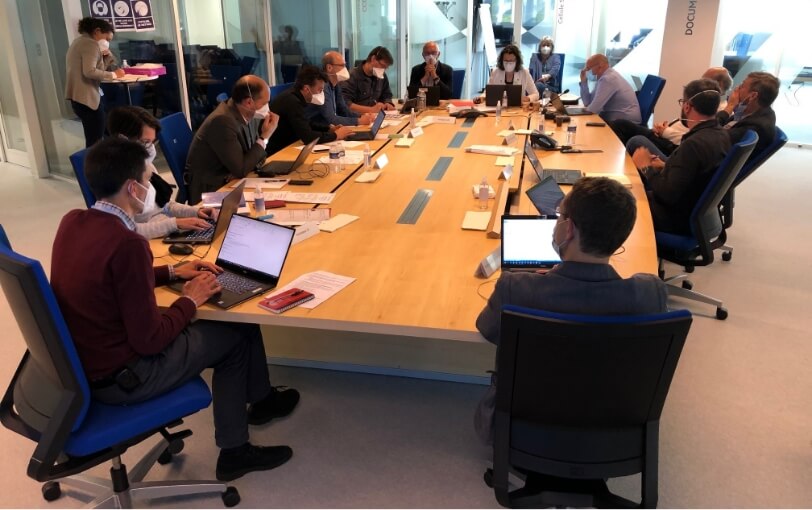 IRSN PARTICIPATION IN AN EMERGENCY EXERCISE ORGANISED BY THE IAEA

Bringing together 77 Member States and 12 international organisations, this highest-level and most complex emergency exercise of those of the Agency aimed to test the responses to a simulated accident at the Barakah nuclear power plant, situated in the United Arab Emirates. It brought to light the need to continuously reinforce cooperation at both national and international level with regard to rapid exchanges of information, diagnostics and forecasts, assistance and coordination in informing the public.

CAESIUM 137 IN A PLUME OF DESERT DUST FROM THE SAHARA

Measurements made in early February 2021 by IRSN demonstrated that the very low caesium 137 activity in the transported particles had contributed to a slight increase in the aerosol concentration in the air, leading to deposits in the order of 0.1 Bq/m2 with a negligible impact in dosimetric terms.

« ANTICIPATION AND RESILIENCE: CONSIDERATIONS 10 YEARS ON FROM THE FUKUSHIMA - DAIICHI ACCIDENT »

This is the title of the report published in 2021 by IRSN to mark the 10th anniversary of the accident in the Japanese nuclear power plant. Addressing topics such as the robustness of facilities and the response capacity of people and organisations to unforeseen situations, how to deal with the risks associated with the combination of malfunctions or events with very low probabilities, and the management of post-accident situations, this publication aims to provide insight born of the feedback from the Fukushima-Daiichi accident, both in order to improve the robustness of nuclear facilities faced with extreme hazards and for improving post-accident management.

The chief executive of IRSN, Jean-Christophe Niel, presented this study at an IAEA conference held from 8 to 12 November 2021, in Vienna, and which was dedicated to reviewing the actions undertaken internationally, 10 years after the Fukushima-Daiichi accident, and to the prospects arising from this.

Echoing the international conference of the IAEA cited above, the symposium organised by IRSN at Montrouge (Hauts-de-Seine) on 24 November 2021 brought together almost 150 experts to discuss the main lessons learnt from the research conducted by the Institute in the field of the human and social sciences (HSS) following the Fukushima-Daiichi accident. Entitled: “After the Fukushima-Daiichi: adapting to the unexpected”, this first symposium organised by the Institute in the field of HSS had the central theme of the capacity of organisations to face up to unforeseen circumstances, not only in a situation of radiological or nuclear crisis but also in the framework of accident prevention integrated into the design and operation of a nuclear facility. It enabled identification of the main areas of consideration on subjects such as the mechanisms leading to the “unexpected” in the demonstration of nuclear safety, the notion of the unforeseen in the work of the expert, and the enhancements that can be generated from discussing the results of research in HSS involving the stakeholders.

On 11 March 2011, IRSN set up its technical crisis centre at the request of the government and concentrated its actions on two priorities: contributing to the protection of the French community in Japan; and informing, with its expert’s gaze, the public about the potential consequences of the accident for the nation.

As soon as the crisis began, IRSN sent a radiation protection expert and measurement equipment to the French Embassy in Tokyo. By making the results of its analyses available to its peer organisations in Europe, to the ETSON network of the European TSOs, to the United States, to the IAEA and, of course, to Japan, the Institute contributed to the transparent management of this major nuclear crisis. By means of sophisticated dosimetric measurements, it was able to inform the French citizens returning from Japan of the low risk level to which they had been exposed.

In France, it alerted its monitoring networks of the ambient radioactivity throughout the territory in order to inform the public, which still harboured memories of the accident at the Chernobyl plant in 1986. In all, more than 150 experts and technicians would be mobilised by the Institute’s crisis mechanism, including in the field of communication, over several weeks. For this purpose, the IRSN website would be adapted to as wide a dissemination as possible of the information and analyses available and would become, with sometimes more than 600,000 daily consultations, a major information instrument for the general public.

By authorizing these third-party services, you agree to the deposit and reading of cookies and the use of tracking technologies necessary for their proper functioning.
Analytics
The cookies generated by Google Analytics are used to understand how users interact with our site. These cookies allow us to collect anonymous numerical information: number of visitors, bounce rate, main traffic sources...
Others
The website rapport-activite.irsn.fr uses tools intended for the realization of audience measurement to improve your user experience. Within the framework of the use of these tools, this website is brought to use cookies and to store information relating to the profile of its visitors (equipment, navigator used,...), to their navigation, and to the frequency of the visits. This information collected does not contain any personal data.
SAVE & ACCEPT